The JCNS lab course, what it offers, next year's dates, and a defeat in a soccer match. 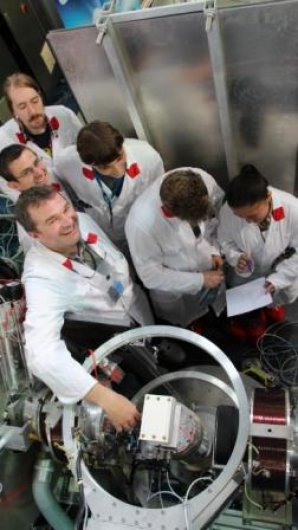 The 18th JCNS Laboratory Course Neutron Scattering took place September 1–12, 2014. As in the previous years, this annual labcourse was held at two locations, Forschungszentrum Jülich for the lecture part and the neutron source FRM II at the Heinz Maier-Leibnitz Zentrum (MLZ) in Garching, close to Munich, for the experiments.

The labcourse is open to students world-wide of physics, chemistry, and other natural sciences. Participation is free of charge for the selected students, and travel expenses are reimbursed. The course is part of the curricula of the Universities of Aachen and Münster. Financing came from Forschungszentrum Jülich with support from the Integrated Infrastructure Initiative for Neutron Scattering and Muon Spectroscopy (NMI3), the European Soft Matter Infrastructure project (ESMI), and the European Network of Excellence SoftComp.

The first week of the neutron scattering course is dedicated to lectures and exercises encompassing an introduction to neutron sources and presenting scattering theory and instrumentation. Furthermore, selected topics of condensed-matter research are addressed.

In the second week, eleven instruments at FRM II are made available for students’ training, including the neutron spin-echo spectrometer J-NSE, the backscattering spectrometer SPHERES, the time-of-flight spectrometer TOFTOF, and the small-angle scattering instruments KWS¬ 1 and KWS-2. These world-class instruments are provided by JCNS, TU Munich, University Göttingen, and Karlsruhe Institute of Technology.

This year 55 students were selected from 229 applicants. The majority of the students were from Physics (24) followed by Chemistry (22), Materials Science (7), and Biological Sciences (2). 18 foreign students came from a total of 13 countries. For the second time in the history of the labcourse the number of participating female students (29) exceeded that of the male students (26).

In the first week lectures were accompanied by exercises in small groups. This concept is routine by now and much appreciated by the students in favour of an all-lecture programme. During the second week, the neutron source and all instruments were working without interruption so that 100% of the tutorials could be held as planned. Feedback of the students was collected in two discussion sessions and by standardised forms. The responses were positive, especially indicating that the level of the course was well-adapted to the audience.

The programme was completed by a welcome party in Jülich, the by now traditional soccer match Physics vs Chemistry, and a farewell party in Garching. Having been member of the physicists’ team himself, the author of this article has to admit defeat.

The next JCNS laboratory course will take place September 7–18, 2015 following the same concept having the first (lecture) week in Jülich and the second (experimental) in Munich. You are cordially invited to submit applications. In January 2015 more details will be posted at www.neutronlab.de.