In the first week of December I have been to the Laboratoire Léon Brillouin (LLB) to present NMI3 to the 23 participants of the Fan du LLB , who met in Saclay for this 4-day school. 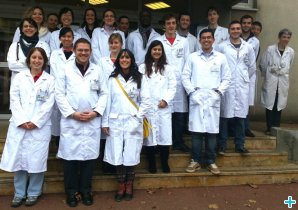 Participants at Fan du LLB 2013 Picture courtesy of the organisers.

Participants at Fan du LLB 2013. Picture courtesy of the organisers.

I took the opportunity to interview Alain Menelle. He is the LLB’s Director advisor and is in charge of both safety and instrumental developments at LLB, as well as the user office and the institute’s communication activities, including the school. He has been organising the school for almost ten years now, and therefore was the right person to tell me all about it.

The first edition of this school was in December of the year 2000. The instrument scientists in LLB had realised that a considerable number of their French users who visited the facility for experiments had no previous education on neutron scattering and knew little about the scientific possibilities of these techniques. The idea to create the school thus came up as the best way to increase the LLB’s user capacity.

Fan du LLB 2013 Instrument Scientist during a practical at LLB.

Instrument Scientist during a practical at LLB

Since its foundation, the main goal of the school has been to train researchers to use the spectrometers available at LLB. For this reason, the school dedicates only one morning to theoretical lectures and the remaining time is spent in the lab where the students receive the necessary specific information to use each instrument, conduct experiments, and learn how to treat and analyse the data. The participants felt very motivated during the practicals because they could bring their own samples to the lab and analyse them. In fact the instrument scientists have noticed that the participants’ motivation and attention during the practicals has increased since they started to bring their own samples.

Most of the 23 participants of this year’s school edition were either PhD students or students who were starting to prepare a thesis. Coming from fields as physics, chemistry and soft matter, their goal was to learn neutron scattering techniques in order to be able to perform their own experiments. To select the right candidates for the school, all the Small Angle Neutron Scattering (SANS) team reviewed the applicants’ motivation letters and their project’s description in order to select the ones who would benefit the most from neutron scattering techniques. In the video a number of selected participants tell us about their motivation to attend the school.

To become part of the European Neutron and Muon Schools supported by NMI3 brought a number of advantages to the Fan du LLB. The school is thus promoted at an international level and can welcome French-speaking foreign students, who have their expenses covered by NMI3. 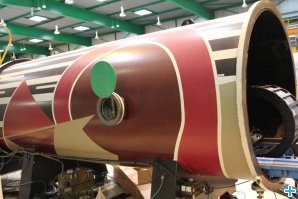 Given that the demand is mainly focussed on a few domains (powder diffractometer, SANS and metallurgy), in the future the organisers might re-schedule and increase the use of related instruments during the school. Nevertheless, LLB provides the students with 20 instruments, including two SANS and one Very-Small Angle Neutron Scattering (VSANS), and a third one currently under construction. Fan du LLB will certainly continue offering education to potential users in the upcoming years!