From May 4 to 8, 27 participants could learn about neutron scattering at the Baltic Neutron School in Tartu, Estonia. Thanks to NMI3, the European participants had their expenses covered to attend the school. This year’s school organiser was Jörg Pieper, a professor of bio-physics at the Institute of Physics in the University of Tartu. He told me about the planning of the school.

A few years ago Helmut Schober and Anatoly Popov, by then working at the Institute Laue-Langevin, thought that it would be important to have a school on neutron scattering in the Baltic countries to enable a neutron user community in the area. The first school’s session was in Riga, Latvia, in October 2012, and the school is since then supported by NMI3.

Why to organise it in Tartu this year? Neutron scattering is now part of the Estonian Research Infrastructures Roadmap. Given that the country has decided to contribute to the European Spallation Source in Sweden, it is relevant to educate an Estonian neutron scattering community, especially young researchers. Jörg Pieper has been a neutron user himself for years now, so he took on the challenge to organise this year’s school edition in Tartu. 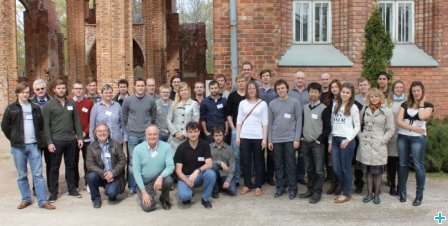 The school’s aim is to provide an introduction to neutron scattering and show its numerous applications. On the first day, participants were given basic information on techniques such as spectroscopy, reflectometry and small angle neutron scattering (SANS). On the following days they could see interesting applications of this technique, such as in biology, magnetism, energy materials, battery research, high pressure, and tomography, as well as to learn about a number of European neutron sources. To get some hands-on training, for the tutorials they were divided in groups of two and could use a computer to analyse and correct data, as scientists do after every experiment. They had access to data from real experiments on a time-of-flight spectrometer, and they also had to build structural models for reflectometry and SANS. Furthermore, all the students had the opportunity to present their own research posters to the group for three minutes. Some were rather nervous but they all did very good!

School time did not end after the lectures. Outside the classroom, it is important to bring the participants together and create spaces to socialise and discuss. With this in mind, the organisers have prepared social activities, starting with a piano concert on the first day. Then in the middle of the week everyone could take part of a tour in Tartu’s old town centre, where they could learn about Estonian history and culture from tourist guides. To finish the week all the participants had dinner together to taste some Estonian delicatessens.

According to Jörg Pieper, the NMI3 funding is fundamental for students to have the opportunity to participate. In their application to the school, everyone had to explain their interest to participate, send their C.V., and provide a letter from their supervisor. In total 50 people took part in the school, including speakers. The participants formed a rather heterogeneous group, coming from different countries, scientific fields, and experience levels; they all had in common a willingness to learn about neutron scattering so that they could use the technique for their work. Get to know their thoughts about the school by watching our video!

Participants in lecture at the BNS2014.

Judith Peters talk at the BNS2014.

The Town Hall square in Tartu.

The Kissing Students’ sculpture and fountain in Tartu.

Oscar Wilde and Eduard Vilde Sculpture, next to the BNS dinner restaurant.