In view of the upcoming new generation of powerful spallation sources, the benefit of a higher neutron flux relies on the development of new, fast and highly efficient neutron detection systems. From a physical point of view, the detection is based on the absorption of the neutron and the subsequent recording of either the electrical charge generated or the light emitted through the absorption process. The best performance so far has been achieved using 3He gas as absorbing material, both in terms of detection efficiency and an optimal signal-to-noise ratio. On the other hand, scintillation counters based on solid converters such as Li-glass, which detect the emitted light, are capable of faster detection: they can record more neutrons per detection area and achieve a better time resolution if required.

Six European partners have teamed up in a JRA to develop a detector in which both of the effects described above are combined. In this so-called Gaseous Scintillation Proportional Counter (GSPC), the absorption of the neutron in the nuclear reaction with 3He generates a ‘primary’ light pulse, and when the charge released in the gas reaches the charge amplifying region of a micro patter device like a MicroStrip Gas Counter (MSGC) it generates a much brighter ‘secondary’ pulse.

Spatial precision of detection is very important for modern neutron applications. In the GSPC detector, this is achieved by using several detectors of light called Photo Multiplying Tubes (PMT) in a particular array. The main tasks of this JRA project were to investigate this new detection process and develop adequate readout electronics. The aim was to demonstrate the feasibility of this new kind of detector within 20 × 20 cm2 active area capable of achieving a 0.5mm position resolution together with a count rate capability close to 1 MHz.

MSGC operating with a gas mixture of 3He-CF4 are very efficient for the production of fast scintillation light with wavelengths between 150nm and 750nm. Spectral response and photon yield are strongly dependent on the CF4 partial pressure and the electric field applied in the detector.

In precise studies performed at LIP and ILL, we obtained emission spectra of CF4 fully corrected for spectrometer and PMT sensitivity for various gas pressures. With rising CF4 pressure the photon yield increases up to ~0.19 photons / secondary electron at 5 bar. Decay times as short as t ~ 15 ns could be confirmed for both the primary and secondary scintillation light. These values guarantee a dead time shorter than 100 ns per event in a real operational system.

In addition, the performance of a potential GSPC mainly depends on the light readout scheme, as well as optical and geometrical parameters such as photon detection efficiency, readout pixel geometry and position reconstruction. All these parameters have been taken into account in the comprehensive software package ANTS developed at LIP Coimbra. ANTS comprises two modules: a simulation module for evaluating the performance of different GSPC designs, and an analysis module for processing either simulated or experimental data using sophisticated algorithms for calibration and position recognition.

The performance envisaged can only be achieved with the proper light readout device and sophisticated, fast readout electronics, capable of handling high data rates and performing complex position calculation algorithms.

A set of three identical small-size prototype detectors were built at FRM II and distributed to the partners at STFC and FZJ. In a series of complementary studies, the number of detected photoelectrons could be increased using a MSGC developed at ISIS and PMTs with UV window and red extended photo sensitivity. The position resolution was correspondingly improved.

A dedicated 32-channel readout electronics system for an Anger Camera GSPC has been built at FZJ. Its architecture is based on a charge-sensitive preamplifier pulse-shaping stage and an 80 MHz (12bit) sampling ADC for each PMT channel with FPGA-based pulse processing. The self-triggering system allows raw data storage on disk via a GBit optical interface for the development of reconstruction algorithms. Online event reconstruction could be implemented in the FPGA or on a Graphics Processing Unit connected to the readout system.

A different, interesting approach is being followed by the STFC team. By applying a commercially available FPGA-based evaluation board, capable of reading 150 MHz sampling ADCs, the team studied the performance of an on-board implementation of the position recognition software, using a neural-network-type algorithm. 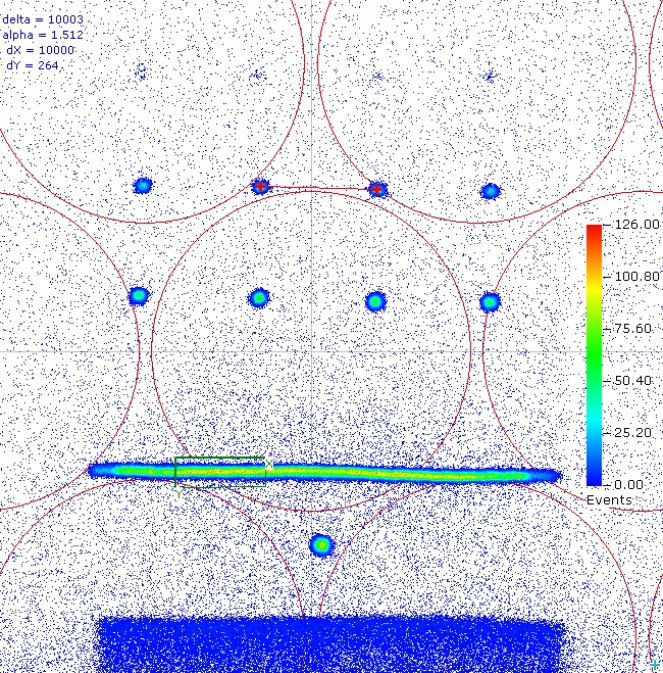 Based on the results achieved during the programme, a large area GSPC demonstrator with Anger Camera readout has been designed and built at ILL. For the first measurements, the detector shown in Fig. 1 was filled with a gas mixture of 1 bar Helium-3 and 6 bar CF4. It is equipped with a 9 cm x 7.3 cm active area MSGC developed at ISIS and an array of 19 Hamamatsu R5070A PMTs for the readout.

In autumn 2012, a first test on the neutron beam with the readout electronics was performed at the CT2 beamline at ILL. Fig. 2 shows the resulting 2D-position spectrum recorded with the 32-channel readout system when the detector is homogeneously illuminated with 2.5A neutrons with a multi-hole / slit boron-nitride mask mounted in front. The hole diameter is 0.5 mm on a 10 mm pitch, while the slit width is 0.2 mm. A position resolution of Δ x ~ 0.6 mm (FWHM) close to the physical limit is achieved by analysing the data with ANTv.06 using a maximum likelihood reconstruction.

This JRA has intensively explored the potential of new technology for neutron detection. Lively and very effective collaboration amongst the partners is now sharing expertise on GSPCs and combining the different technologies available in the individual groups. This is reflected in the various joint training schools and experiments that have been performed with participants from all the partners involved. This collaboration is well set to continue developing GSPC detectors in the future.