The technique and the facilities where you can find it 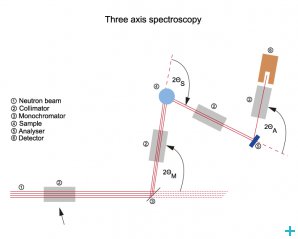 Three-Axis Spectroscopy allows the determination of the energy transfer by analysis of the wavelength. To achieve this, the neutrons are characterised before and after hitting the sample. These three processes (monochromization, sample interaction and analysing) make up the three axes of the triple-axis spectrometer.

The principle of a three-axis neutron spectrometer is shown in fig .1 . A white neutron beam produced in a fission reactor, hits a single crystal monochromator. Due to Bragg reflection, neutrons of a particular wavelength or energy are selected . This energy may be varied by rotating the crystal around the first of the three axes.

Neutrons of a defined wavelength are selected from the “white” beam by means of a single crystal monochromator M (first axis). The wavelength or incident energy of neutrons depends on the monochromator material and the angle 2θM. The monochromaticed beam encounters the sample S which is placed on the sample table. The orientation of the sample with respect to the incident beam can be altered by a rotation of the sample table – the second axis. The sample can be oriented arbitrarily in all three directions in real space. The sample S diffracts by an angle 2θS.

At the sample, neutrons are scattered and may loose or gain energy. Those neutrons which are scattered under a scattering angle 0 and which have a specified final energy are detected in the detector D which is placed behind an analyser crystal A. Bragg reflection at the analyser selects the desired energy which may be varied by rotation of the analyzer crystal and the detector around the third axis of the spectrometer. This type of spectrometer is the most universal one of all neutron spectrometers .

Variation of incident energy, final energy, scattering angle and sample orientation allows to measure the scattered intensity at (nearly) arbitrary points in the four-dimensional space which is generated by the momentum transfer (Q) and the energy transfer hω between neutron and sample. The measured quantity is the scattering function S(Q, w) which is the Fourier transform of the space-time correlation function G(r, t).

The experimental spectra yield information about the microscopic dynamics of the sample under consideration which can only be obtained by neutron scattering since particle motions are resolved simultaneously in space as well as in time.

The scattering vector Q and the energy transfer hω are unequivocally determined by the angles 2θS and 2θA . Thereby , the wave vectors ki and kf are connected with vector Q and energy hω by Q = ki – kf and ΔE = h2(ki2-kf2)/2m . The sense of the energy transfer determines whether the neutron has gained ( ki< kf , ΔE < 0 ) or lost energy ( ki< kf, ΔE > 0 ) during the scattering process.

Three-axis spectroscopy can be found at: 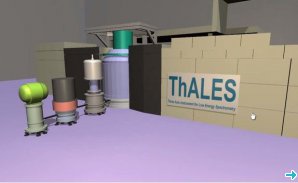 This interactive 3D animation of the Three-axis spectrometer at ILL, Thales, demonstrates how a neutron Three-Axis Spectrometer works.