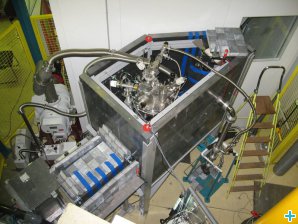 UCN - ILL Overall view on the UCN source: cold neutrons come from the left and enter the cryostat situated behind its lead shielding. The guide for UCN extraction towards a detector is visible on the right as shiny tube coming out of the lead wall. Picture: ILL

Neutrons themselves are an object of study, because knowing their characteristics can contribute to the development of the grand theories of our universe. They are also probes for exploring atomic nuclei and for measuring fundamental constants.

Neutrons have been used to investigate the quantum effects of gravity or to test Einstein's mass-energy equivalence, for example.

The neutron itself is still an object of study: for example its exact weight, lifetime, gravitational mass and electric dipole moment are still being determined. Ultra-cold neutrons are particularly useful to study these characteristics.

Ultra-cold neutrons are totally reflected by material surfaces. This means that they can be confined in ´boxes´ such as material neutron bottle or magnetic traps, thus allowing researchers to conserve them during a longer period of time, which greatly facilitates measurements.