Neutrons and the study of macromolecular structures

Watch Dirk Wallacher and Matthew Barrett on the new humidity chamber that will shed light on processes behind Alzheimer’s disease!

The human genome is believed to code for between 40,000 and 1000,000 proteins. In the current, post-genomic era, information resulting from genetic sequencing is being harnessed to reveal how these proteins are involved in complex cellular processes. Each protein does a particular job and to really understand life´s processes we must find out how all of them perform their role. We know that the shape and structure (the arrangements of atoms) of proteins is related to their function, and we are starting to realise that dynamic changes within a molecular structure might also be involved.

This is particularly important to treat illness, for example, as most diseases result from a malfunction at the molecular level – a structural defect resulting in an inactive enzyme, a pathogen blocking a crucial cellular process.

In recent years, neutron scattering has played an increasing role in the study of biological structures.

In biology, the main objects of study are large molecules such as nucleic acids, proteins, lipids or complex sugars such as carbohydrates, with sizes ranging from 1 to 10 nanometres.

The wavelength of neutrons makes them ideal to study such large molecules, or even macromolecular structures such as cell membranes or viruses. 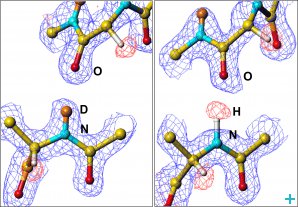 Another important characteristic of neutrons is their scattering power. Neutrons scatter off different atoms with different power, which allows us to see inside molecules.

A technique called contrast variation allows to highlight parts of a structure by replacing its hydrogen atoms with the stronger-scattering deuterium (a hydrogen isotope containing a neutron in its nucleus).

Another interesting characteristic of neutrons is that they can lose or gain energy to or from the atom they bounce against during scattering. This phenomenon, called inelastic scattering will set the atoms in motion, and can therefore reveal their motion patterns. This can be used to determine how a molecule moves and if it has flexible or rigid parts.

A JRA supported by NMI3 is working on a new humidity chamber. The instrument will be used for neutron scattering experiments to reproduce the human body conditions in order to shed light on biological processes such as the development of Alzheimer’s disease.

During a neutron scattering experiment the sample might degrade and produce wrong results. In our new video, researchers explain their work on a set up to control the sample quality along time so that false data can be discarded. This work will improve the data quality. 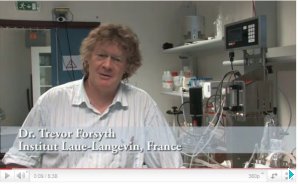 Trevor Forsyth about the Deuteration JRA

Watch Dr. Trevor Forsyth talk about his work and the Deuteration Joint Research Activity he coordinates for NMI3, at the Institut Laue Langevin (ILL), in Grenoble. 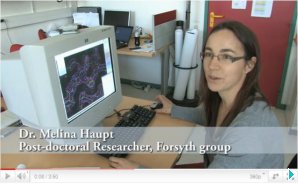