Neutrons and the study of soft matter

Watch our video on the multi-angle light scattering setup to better control the sample quality over time.

Soft matter encompasses a wide range of materials found everywhere, both naturally and man-made, such as polymers (plastics), surfactants (soaps and detergents), liquid crystals (in electronic displays), micelles and biological matter such as cell membranes.

Another type of soft matter includes fine suspensions of one material in another: they are called colloids and can take the form of gels or foams.

Research into the physical and chemical properties of soft matter is of increasing importance for application in a wide range of domains – cleaning products, cosmetics, plastics, paints, coatings, pharmaceuticals, drugs …

Researchers studying soft materials and interested in relationships between their structure and the properties that control their behaviour. 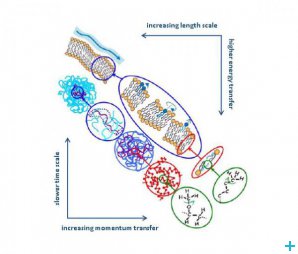 Different isotopes of the same chemical element have different scattering power. In particular, hydrogen, with a nucleus containing just one proton, scatters very differently from its isotope containing an additional neutron deuterium. Therefore judiciously substituting deuterium for some or all hydrogen atoms creates or modifies the scattering contrast for selected components in soft matter – this method is called contrast variation.

Neutron beams can be prepared so that their wavelength matches the length scale of the atomic structure of the studied soft matter. For mesoscopic macromolecular structures, the scattering angles for such neutrons are then very small. To measure them, a neutron beam with well defined direction is directed at the sample and the scattered neutrons are detected by a position-sensitive detector positioned far enough to resolve the corresponding small direction changes.

The detectors therefore must be placed far away from the sample. The resulting intensity distribution contains information about the shape of macromolecules, size distribution of particles and their interaction in solution, and many other intrinsic or emerged structures – depending on the investigated system. Further such small angle neutron scattering techniques techniques can be combined with special equipment to simultaneously study the flow of material under a force and the corresponding changes in the molecular structure, for example.

Another important method is reflectometry , whereby neutrons are reflected off a surface or interface to give information about the distribution of polymers, phospholipis or other molecules across thin films or layered structures.

The Bio diffractometer aims at the investigation of the crystal structure of macromolecular crystals, in particular protein crystals. By measuring the intensity of 10000 nds of reflection spots at different scattering directions and for different crystal orientations, the exact position and nature of all atoms in a protein molecule of such a crystal are revealed. Neutrons are especially useful to yield proton positions and thereby help to answer questions on reaction mechanisms for chemical reactions performed by the proteins (enzymes).

The motions associated with soft matter structures – movements of molecules or vibrations of layers for example – can be studied using inelastic neutron scattering techniques. In time-of-flight instruments the energy exchanges of the neutron with the sample is detected by a change of neutron velocity as expressed in a changed flight time to the detectors. In back-scattering spectrometers even smaller energy changes are analysed by neutron reflection from perfect crystals.

Neutron spin echo spectroscopy has the highest sensitivity to neutron enegy changes, it detects inelastic –most quasielastic—scattering and so allows to follow very slow dynamic processes in soft matter, for example the diffusion-like movement of a polymer chain in melt; or the fluctuation of a surfactant (soap) mediated oil-water interface in a microemulsion; or the diffusion, rotational tumbling and shape fluctuations of a protein under physiological conditions. The method takes advantage of an important property of neutrons – their spin. The spin precession in a magnetic field is used a clock to detect very small velocity changes of the neutron.

For examples of research in this field please visit the ILL and ISIS soft matter pages.