In a new video, members of the project tell us about the advantages of collaborating at the European level. 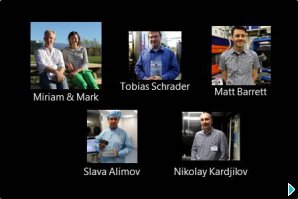 NMI3-II: The benefits of European Collaboration

Click to see the video on the benefits of European Collaboration.

NMI3 is a consortium of the main neutron and muon facilities in Europe, and is funded by the European Union. It counts a total of 18 partner organisations from 12 countries. All project activities thus involve trans-national collaboration between different institutes. Whereas such partnership might be difficult to manage, it facilitates development of new instruments and techniques to serve the broader neutron scattering and user communities.

In this new video, you can learn about the benefits of this collaboration as well as the feedback we received from the European Commission, by the NMI3 Manager and Coordinator, scientists, and school organisers.

Some of the main advantages of NMI3 are the following:

Call for proposals for funding of neutron and muon introductory schools

The deadline for applying for funding for Neutron or Muon Introductory Schools is January 24. The schools will be supported by the SINE2020 project. Read more.

New video: Mark Johnson on the impact of NMI3

Given that NMI3-II will finish soon it was time to take stock of the work developed over the last four years. Read more.

This position is funded by the SINE2020 Deuteration RA. The deadline for applications is December 6. Read more.